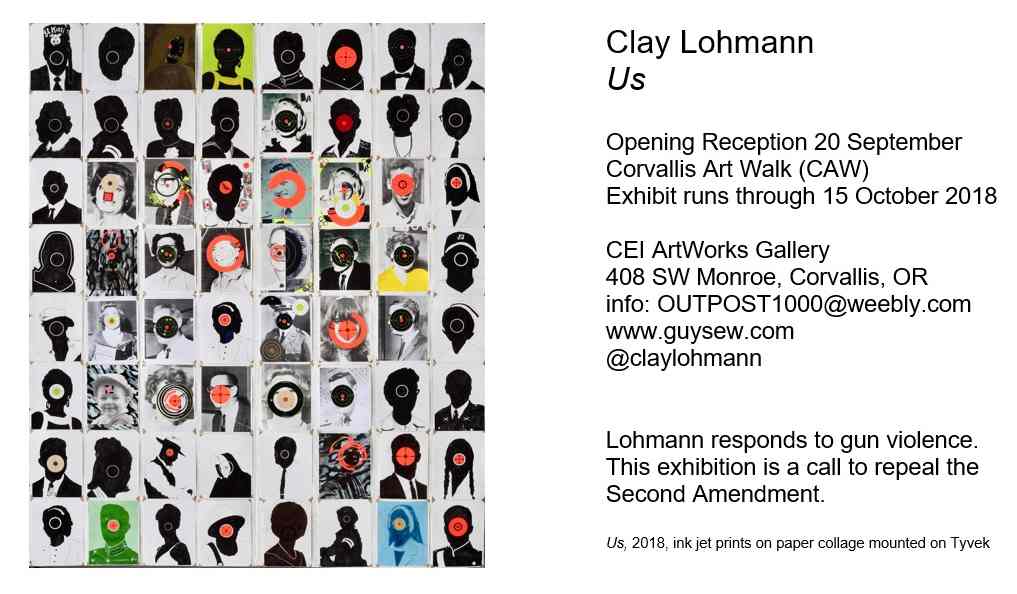 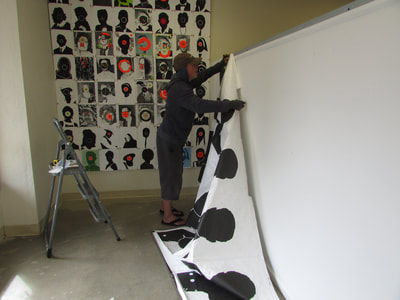 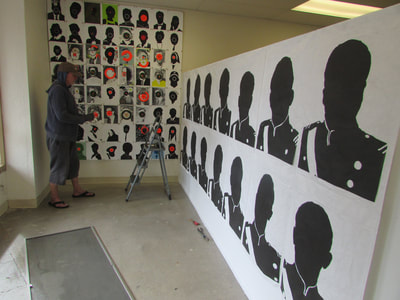 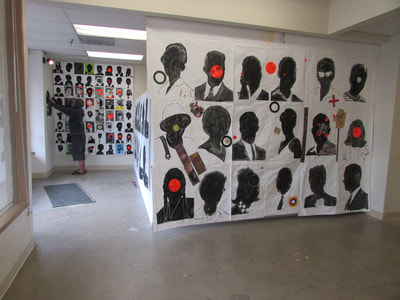 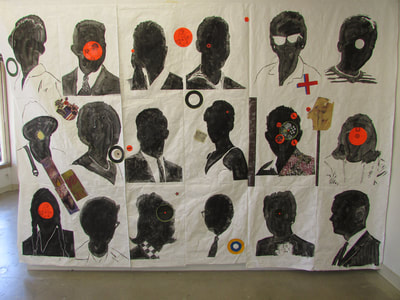 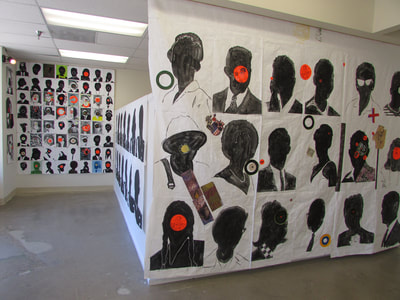 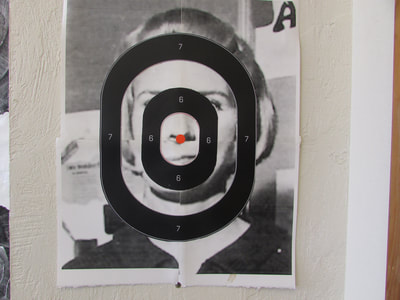 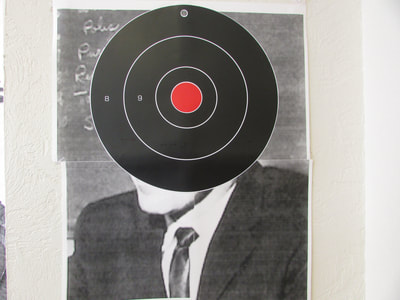 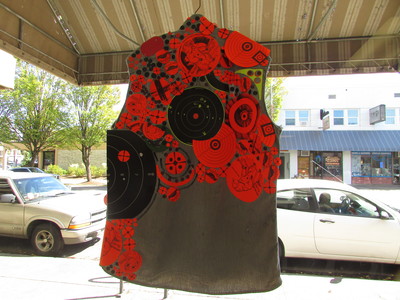 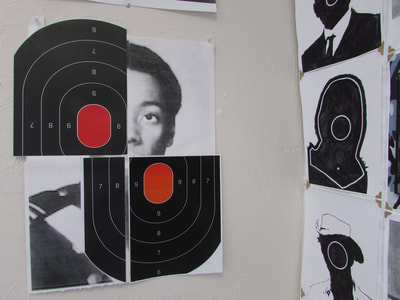 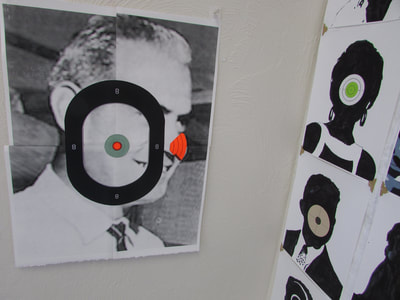 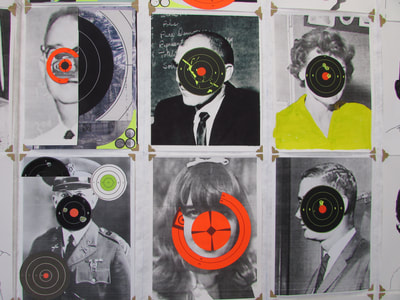 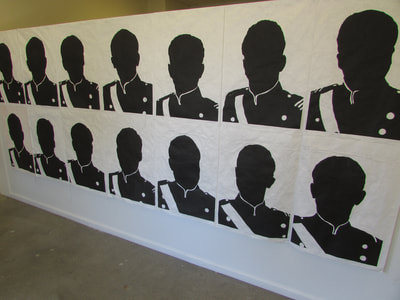 Corvallis Arts Walk Spotlight: Clay Lohmann tackles gun violence in 'Us'​Gazette-Times
Name: Clay Lohmann
Occupation: Artist
Hometown: "I was raised in Osage County, Oklahoma on community-held tribal property and went to the reservation school. It was funded and staffed, in terms of the teachers, by the Quakers. I think we call them Friends now. It was an interesting place to grow up."
Exhibit: "'Us' has to do with my concerns about gun violence in America. I believe that repealing the Second Amendment is the only way we can change gun laws. 'Us' points to the fact that all of us are potential targets anytime we congregate."
Location: CEI ArtWorks Gallery, 408 SW Monroe Ave., Corvallis
Medium: "I'm pretty committed to fabric. All of the pieces in this exhibit are or contain Tyvek which sews beautifully, but is not fabric. The exhibition contains Inkjet prints, and paintings, on both paper and Tyvek."
About the exhibit: "The first works in 'Us' started after 9/11 and our invasion of Iraq and Afghanistan. These early pieces contained only military figures. I expanded to include all types of persons after the Parkland School shooting. Researching the Second Amendment, I read about James Madison, who wrote it.
"When I was young, all targets were made as silhouettes of living beings: a rodent, a coyote, a deer or a human. You could order them from Sears, Montgomery Ward, or any number of places."
"I have a really good high-powered air pistol, and everyone that came in the studio I invited to shoot (targets) for a period of two or three months. This was my first encounter with Splatter-targets and I was amazed that there's tens of thousands of them. It's an industry. It kind of blew my mind."
"(For the installation, on some pieces) I have simply stuck Splatter-targets on the figure."
Why this exhibit now? "There was something about the Parkland shooting that triggered my outrage at the complete disconnect we have with firearms in America. And the misinformation from the National Rifle Association and the current administration."
"As of 2016, the Center for Disease Control and Prevention (reported) 38,658 people were killed by guns that year. That is 105.9 per day. Suicide is number one. Murder is number two, and death by police is number three.
"The NRA takes information like this and distorts it, and it has everything to do with the fact that the United States is the world's largest arms manufacturer and intends to continue being so."
"I'm not a political artist, per se. It wasn't my intention to be political, but I've been living with someone who is widely known for a political piece, and I guess it's rubbed off on me."
(Julie Green, Lohmann's wife, is an award-winning artist and art professor at Oregon State University. Her long-term art project, "The Last Supper — Final Meals of U.S. Death Row Inmates," has won national attention.)
Inspiration: "When I was a kid, living in the country, my folks had some art books. I found a picture in one of them and had the page marked, so that I could study it. I had no idea how one goes about doing it, and I had no idea if I had the requisite skills to do it. And nothing has ever changed, except I clearly have the requisite skills."
Impact on viewers: "With the Second Amendment we need to start a dialogue, but the conversation has to go through our representatives in Oregon and Washington."
"All eyes are on the midterm (elections), and the only thing I hope to accomplish by doing this exhibition downtown at CEI is to help ensure that everybody that legally can goes and votes however they choose to vote."
"I understand that repealing an amendment like that is not an easy task. The basic issue here is that lobbying organizations like the NRA and others have enough monetary clout that if anyone tries to slightly alter the interpretation of the Second Amendment, they will be fought in court to the very last days."
Previous exhibits: "I have exhibited on both coasts. I've been at the Textile Arts Center in Brooklyn, the Schneider Museum (at Southern Oregon University in Ashland) and the Jordan Schnitzer Museum of Art (at the University of Oregon)."
What should people know? "I was born in Marfa, Texas, and if that doesn't mean anything to you, then you should Google it."
Powered by