Description: Under the guidance of instructor Anna Fidler, OSU art students present work surrounding the modification and repurposing of aged media, such as magazines, vinyl records
and books through both additive and subtractive processes.

​Work Descriptions:
Johnny Beaver's work looks at the hardbound book as a sculptural medium, painting on and perforating their form to create mask--‐like structures that explore nuances of expression.

Mary Garrard asks “what happens if I……” and goes from there. She uses additive and subtractive methods of image and mark making on album covers and records, eschewing content for spontaneous experimentation in applying materials. She is especially interested in using acrylic transfer methods to
Adhere found magazine and printed images to the supports.

Nishana Hamann uses the processes of burning, cutting and pasting the album cover and jacket to create a narrative about finding beauty from something that has been destroyed.

Milla Oliveira utilizes classic works in children’s literature as a departing point in her investigation surrounding methods of storytelling and quotidian routines. Inspired by the color schemes and
seemingly innocent quality of the characters, she disrupts the original narratives and a stage for play
emerges.

Spike Keenan takes the well--‐ worn family favorite book, The Hobbit, and combines it with found and natural objects to enhance the touch of time.

Lily Waggoner breaks records and CDs and tears album covers to show how the broken pieces can come
together to create a whole and unreal presence. This work is a formal exploration of texture, color, and
image.

Francisco Morales’ Work at ArtWorks is based on the idea of re--‐contextualizing outdated methods of
communication in an age of fast--‐paced information acquisition. The adoption of social media creates an environment where “instant news” and shallow understanding prevail. Stereoscopic Vision is a metaphor for a slower method of communication. The work’s dependence on light and subtlety invites
the viewer to slow down and consider the ways we present information.

​Gary Dewhurst’s work responds directly to his everyday experiences. This work is a re--‐kindling of a memory with his mother in support of a shared understanding of the experiences between them.
Record album covers, stone dust, newsprint, gel, and magazines evoke a memory never actually attended.

Artist Bios:
Paying homage to the traditions of Expressionism both visually and conceptually, Johnny Beaver’s work
investigates experience, states of being, mental illness and the juxtaposition of the individual and community. With a distinct visual language, he focuses on color, balance and
perspective.

Mary Garrard lives and makes art in Corvallis, Oregon. She loves Printmaking, Painting, and Drawing. She particularly enjoys figure drawing with a lot of messy charcoal. Her fingernails are thus seldom clean.

Nishana Hamann works mainly in graphite, charcoal, and color pencil. She enjoys capturing moments in time through portraiture as well as exploring emotional states of being through symbolic, and often allegorical, figurative drawings. Hamann lives and works in Corvallis.

Originally from Rio de Janeiro, Milla Oliveira has had a lifelong engagement with dancing, languages and
diverse cultural systems. The quest for inventive outlets of expression is a major driving force in her work. Recipient of the Dr. Helen Plinkiewisch scholarship, Oliveira is a BFA candidate with focus on Painting, Drawing and Art History.

Spike Keenan is a local artist who enjoys drawing, painting, and sculpture. She creates works from common, natural and found objects.

Working with charcoal, watercolor, and oil paint, Lily Waggoner juxtaposes the reality of the world around her with abstraction. Born in California, Waggoner lives and studies in Corvallis.

Francisco Morales currently explores the connections drawn from his memories and feelings. A
continuous thread of iconography and symbolism creates a narrative that marries personal experience
with current events. As a Mexican--‐American artist, Morales responds to the sociopolitical climates of the USA and abroad.

Gary Dewhurst enjoys creating art in a variety of drawing mediums and unconventional techniques.
Typically, this expression reveals itself in the form of postmodern abstracted works that he uses as a
catalyst to draw attention to environmental and cultural issues. 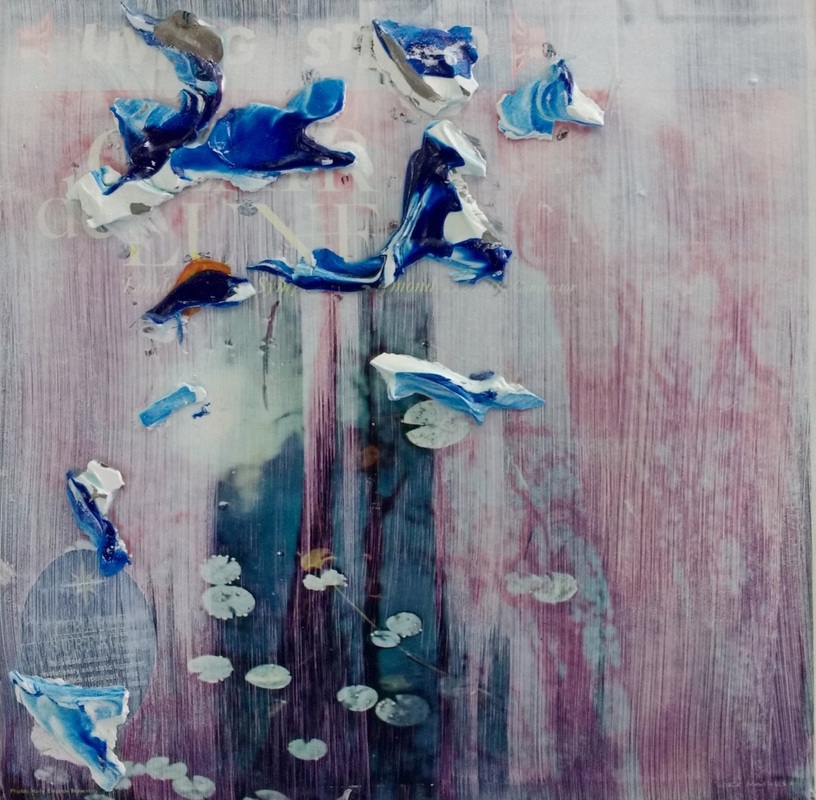 ​Mary Garrard
12x12x.5"
Joint compound and acrylic on album cover
2015
"+/-" Exhibit by OSU Art Students
Corvallis Gazette-Times 3/17/16
By Patrick Fancher​
Anna Fidler asked her students to creatively repurpose discarded items by using additive and subtractive processes.
The instructor was so pleased with the finished assignments from her painting concepts class that they’re on display now at the ArtWorks (CEI) Gallery.
The exhibit from Oregon State University Art Department, titled, “+/-”, will be featured as part of today’s Corvallis ArtsWalk. It will be on display at the gallery through April 18.
Fidler, an artist and educator who came from Portland fall term to teach full time at Oregon State University, said the eight students went to Goodwill and other places to find aged media, primarily used books and records, which often formed the starting points for their work.
Some students’ subtractive methods included removing information by painting over the words on a book cover or record album to alter the message or cutting into them to make a more sculptural work.
To add to the media, the artists used different paints, compound mixtures, handmade tools and other materials.
The featured OSU artists include Johnny Beaver, Mary Garrard, Milla Oliveira, Francisco Morales, Nishana Hamann, Spike Keenan, and Lily Waggoner.
“It’s personal and interpretative,” said Fidler, who will also display her own artwork as part of the exhibit. “Each student had their own concept and way of working with it.”
To cite one example, Fidler said, Oliveira changed the context of children’s Little Golden Books by cutting out the information and creating a collage that tells a totally different story.
Beaver found hardbound books to explore as sculpture.
“He made these mask-like structures by carving into books and removing info to create eyes, a nose and mouth. They’re very loose and abstract and all about expression,” Fidler said.
Fidler said another artist, Nishana Hamann, was inspired by the Vikings
and so pillaged a record by burning and pasting other images onto an album cover.
“It’s still recognizable as an album cover, but it’s definitely her subtractive process of taking away,” Fidler said.
Keenan created a nature-inspired piece by cutting into an old personal copy of “The Hobbit.” It was yellowed and falling apart, and now looks like it has moss growing out of it, Fidler said.
“People were extremely inventive, yet they were using these older materials that were being repurposed and modified,” she said.
Fidler hopes viewers of the exhibit see that something old and discarded can have a new life as a beautiful object.
“Now things don’t necessarily have to go to the landfill. They can be used in a really productive and creative way,” she said.
The instructor said another goal of the “+/-” exhibit is to show people in the mid-valley the strengths of the OSU Art Department and how imaginative its students have been in interpreting an assignment and creating an exhibition.
“It’s not just about school. Of course, it’s an assignment, but they have taken it to a new level,” Fidler said. 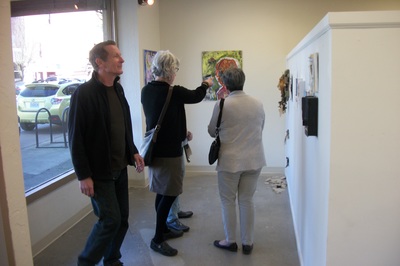 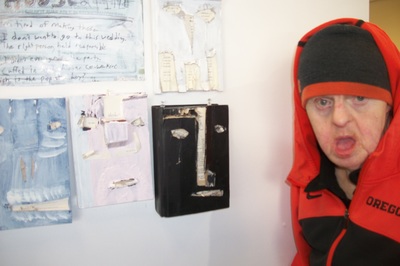 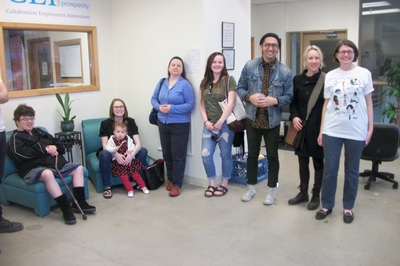 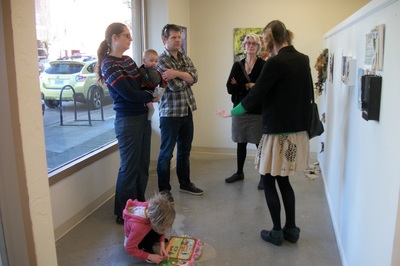 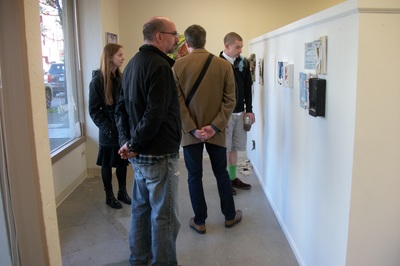 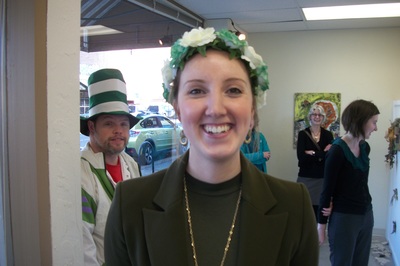 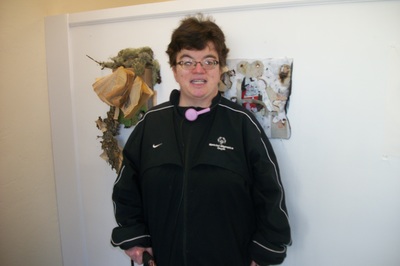 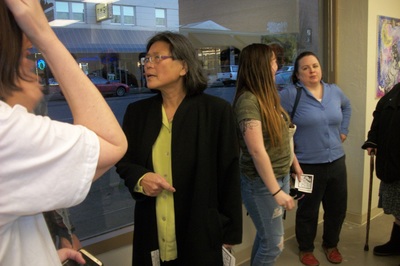 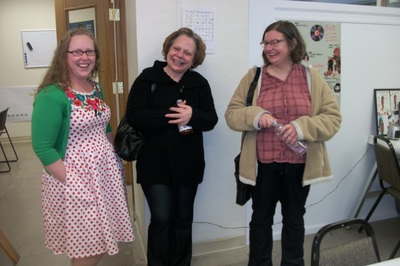 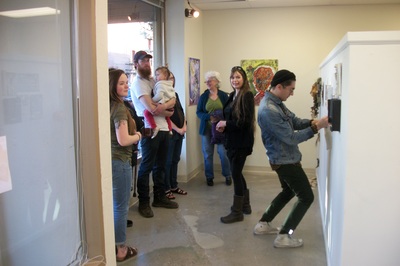 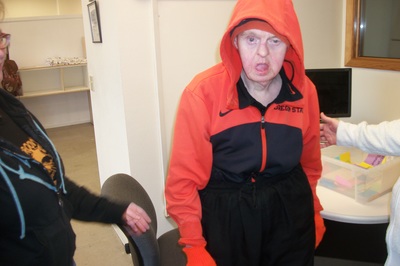 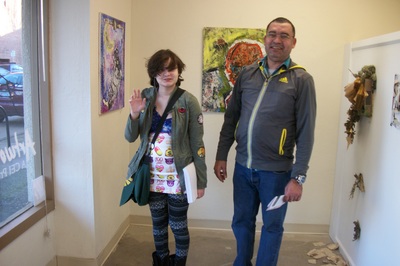 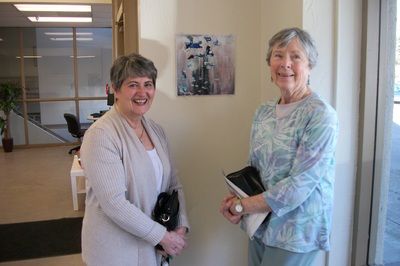 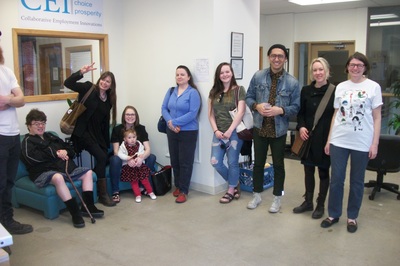 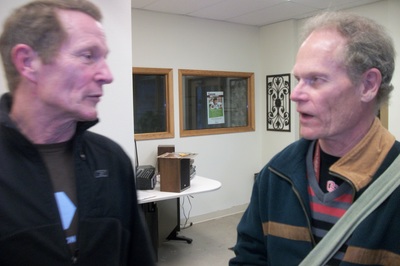 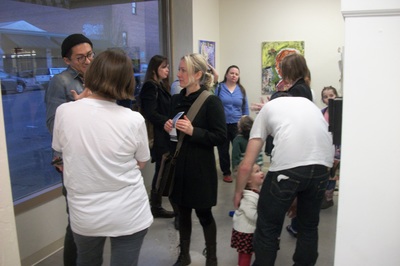 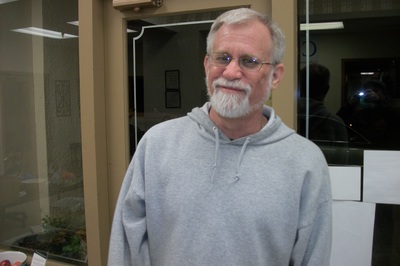