Silas Jones is an artist living in Lexington, Kentucky. His interests are eclectic and extensive. The inspirations for Jones’ current drawings range from Female Body Builders to Japanese Anime and Video Game Series Voice Actors and beyond.

On his methods… Mr. Jones interests are varied; here we are primarily looking at examples of his work based on his interests in the culture of Japanese Video Game and Anime voice over actors and Female Bodybuilders. Jones is a fan of each and explains that for video games as well as Anime, he meticulously examines the credits and notes the actors involved. He then searches for their likeness on Google and creates a caricature, when he is finished he place the drawing on his facebook page and friends the actor. Occasionally this sparks a conversation between the two via facebook. His methods for creating caricatures of Female Bodybuilders are roughly the same.

Typically Mr. Jones creates one pencil drawing per day, usually on 8 1/2x11 paper and while many of those he draws initially reside at some distance from him, he also draws many of the those he meets from day to day. He is especially fond of drawing “Office Friends”. Mr. Jones spends a portion of his week, working in an office/studio at the University of Kentucky’s Human Development Institute. It is here that Jones establishes many rich, concrete friendships which usually result in an “Office Friend” drawing.

An exhibit of the work of Silas Jones can be found at Third Street Coffee, March 15- May 15

I started drawing when I was 3 or 4. It the time, I started drawing dinos﻿﻿aurs. Around 2003, I started drawing people, characters or anything that is kind of challenging. I draw based on if I saw cartoons, anime or by video games upon my vision. I felt good about myself. The reason I draw is to inspire families, friends and the real world.

O1000: Your work is fascinating… tell us what subject matter you have been focusing on for the past month?

What I've been drawing recently is designing female bodybuilding friends from Facebook. And I've been doing cartoon face portraits of any Facebook friends who were interested in that. I just do draw for those who appreciate my art talents.

O1000: Your work suggests interests in people and subjects which many of us find obscure, one example of many would be your drawings of Japanese Video Game Voice Over Actors who have passed away. What led to your interest in these actors, how did you find about them?

As far as the Japanese voice actors, I like any of the them when they provided a voice for each character and are quite unique. I play video games and watch animes. I found out the cast in the credits. Once I have the name, I look them up on the internet.

O1000: Facebook plays an important part in your practice. Can you tell us how you facebook to develop relationships with those you include in your artwork?

I connect with bodybuilders and other friends on Facebook. I do invite them to be my friend or any mutual friends send me a friend request to be their friend because they have seen my drawings and sometimes I Google them on the internet.

I like to combine the people I know with dinosaurs, monsters, and anime heroes. Beth is the Running Ostrich because she walks fast. Jeff looks more powerful as Jeff Kong. The Kathyosaurus is another character, created from one of the hard workers at HDI. She puts her heart and soul into what she does best. 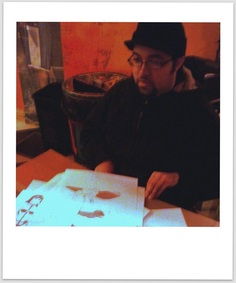